Rajasthan Dairy Recruitment 2021 Pashupalan Vibhag:Department of Dairy and Animal Husbandry Notification of new recruitment will be released soon. Rajasthan Dairy has not been recruited for a long time. Dairy and Animal Husbandry Minister of Rajasthan, Kataria said that the government has approved the posts of 504 officers and employees in the department. Of these, 172 posts are approved for Jaipur Dairy. While replying on behalf of Minister Kataria, while answering supplementary questions asked in this regard by the MLAs during the Question Hour, the last promotion was done by Jaipur Dairy Association on 24 February 2014. He said that when new recruitment will be done. Then the retired officers will be removed and departmental promotion will be done. He said that there has been no new recruitment in the last 36 years, whereas the milk business is 5 times bigger. 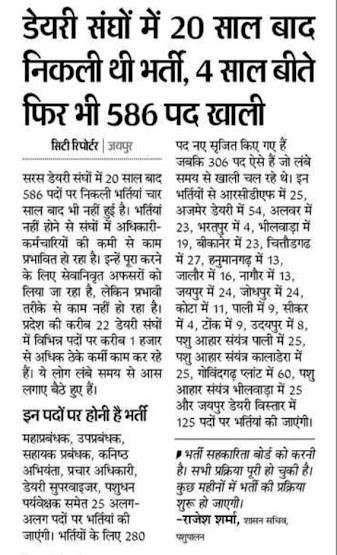 Kataria said that the government has approved the posts of 504 officers and employees in the department. Out of them 172 posts are approved for Jaipur Dairy. Minister Kataria said that letters have been written to the Cooperative Recruitment Board in this regard on 17 January 2020 and 26 February 2020.

Recruitment Board has to be done. All the process has been completed. The recruitment process will start in a few months. – Rajesh Sharma, Government Secretary, Animal Husbandry

Earlier, Minister Kataria said in written reply to the original question of MLA Smt. Indra that retired officers have been kept in service at Jaipur Dairy. He named the names, posts and work details of retired officers on the floor of the House. Minister Kataria said that in relation to the Delegation of Power to Retired Officers, it is described in the rights of the Managing Director Milk Union under sub-rule 22.1 of the Union to delegate all or any of its powers and responsibilities to other senior officers but the ultimate control and authority itself Will remain in He kept a copy of the office order related to administrative and financial powers given to the three retired officers issued by the Managing Director, Jaipur Dairy Association under the above table.

Click on the link below to watch the official news.