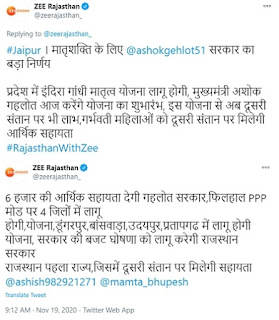 Indira Gandhi Matritya Yojana 2020 has been started by Rajasthan Chief Minister Ashok Gehlot. Under this scheme, about 3 points more than 75 lakh women will be benefited under the scheme. ₹ 6000 to the state government as financial assistance to eligible women. This scheme has been implemented so that the women of poor families in the state can take good care of their children and support them financially, the scheme has been named Indira Gandhi Maternity Scheme. The total budget in the scheme has been kept at 225 crores and the number of beneficiaries has been kept at 3 point 75 lakh women. The application for the scheme will be online. Under this scheme, the first installment on the first pregnancy checkup and registration at the time of second child will be released. On completion of prenatal check, the second sentence will be Rs. 1000 on the birth of the child. The third installment will be ₹ 1000. With this, all the regular methods of the child up to 3:30 months and the registration of the newborn’s birth certificate will be ₹ 2000 and the second Permanent family employment after child Neither will the ₹ 1000 financial assistance be given as the fifth installment.

The woman applying should be a permanent resident of Rajasthan.

Under the scheme, the benefit of the scheme will be given only on the birth of the second child.

Only pregnant women will get the benefit of the scheme under this scheme.