Youths will get employment opportunities: On the initiative of Chief Minister Mr. Ashok Gehlot, the State Government is continuously filling the vacant posts in various departments to provide maximum employment opportunities to the youth. Along with this, new posts are also being created as per the need to give impetus to the Rajkarya. The Chief Minister has approved the creation of 337 new posts for Sanskrit Education, TAD and Urban Development Department and various courts. Besides, recruitment has also been approved for 46 posts of Assistant City Planners for planned urban development. 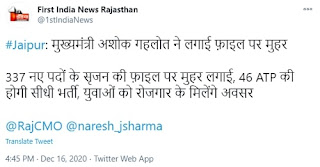 The Chief Minister has approved the proposal to create 308 new educational posts in Sanskrit Education Department. These include 48 posts of principal, 10 of headmaster, 184 of lecturer and 66 posts of third grade teacher. With the creation of these posts, teachers will be available in the Sanskrit Education Department in the graded and newly opened schools as per the requirement. Besides, Sanskrit education will be encouraged in the state.

Shri Gehlot has approved creation of four new posts of College Hostel Superintendent in Tribal Regional Development Department. These posts have been sanctioned for the newly constructed college hostels in Sarada, Salumbar, Khairwada and Aburod. Shri Gehlot has also agreed to take out outsourcing services for the operation of these hostels on kitchen bases, watchmen, class IV personnel and job bases for cleanliness work.

Direct recruitment will be done on 46 vacant posts of ATP

Shri Gehlot has agreed to directly recruit 46 vacant posts of Assistant Town Planner and Assistant Town Planner (PR) in the Town Planning Department, various authorities, trusts and other autonomous institutions. The Chief Minister has also approved to make temporary appointment on Argentine Temporary basis till regular selected or promoted candidates are available from Rajasthan Public Service Commission on these posts.